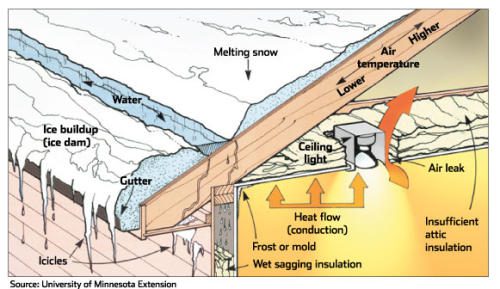 On a frosty morning, your roof is a map of your attic heat loss and a blueprint for your air-sealing strategy.

The time to prevent ice dams is now. Be a smart consumer and avoid unnecessary expense, such as paying hundreds — even thousands — of dollars to have ice dams broken up. And there’s a huge bonus: The same steps that will save your home from ice dam damage also will make it more energy efficient.

A basic explanation of how ice dams form: Snow melts on the roof over the living space of the house if the roof’s temperature is above 32 degrees — often because the house’s heat is leaking up through the attic. The water runs down the roof slope. When reaching the eaves, where the roof extends into below-freezing air, the water freezes into an ice dam that causes water from additional melting to back up under the shingles. That water can seep into walls and ceilings, causing stains, mold and mildew.

Other factors in ice dam formation: Snow is an insulator, and just having a thick layer of it on top of the house can cause the roof to get warmer and melt more snow. Freeze-and-melt temperature cycles exacerbate the problem. Complicated roof shapes that include valleys and dormers can keep water backed up on the roof. Homeowners may think that just adding insulation will do the trick, but since insulation doesn’t stop warm air leakage, that’s not enough.

It takes more than snow to make ice pile up on the roof. The type of winter that leads to ice dam problems is where you get a larger share of your seasonal snowfall early in winter.

“In the heart of winter, the level of snow load solidifies into denser and denser layers that provide a blockage. When you get freeze-thaw cycles, there’s no outlet for that water to easily escape. Crusty-looking snow under fluffier snow means ice dams are imminent.

HOW TO PREVENT ICE DAMS

Reducing damage from ice dams is a huge motivator for residents to make their homes energy efficient.

The same things that prevent ice dams also keep heat bills down: a tight living space with enough insulation and proper attic venting. The combined goal is to keep the attic below freezing so it won’t melt snow sitting on the roof.

“Heat that escapes into the attic is the enemy here. Having your home inspected by a professional can help identify where your problem areas may be. Call your local restoration company and ask them to do a scan of your home with there thermal imaging camera.

The thermal imaging camera or other methods to pick out hot spots in walls and ceilings that indicate where heated air is leaking into the attic.

Next, the restoration professional evaluates if the house has enough insulation, keeping in mind that building code is a minimum and some houses might need more in order to stave off ice dams.

Finally, the third leg of the stool: Consider whether additional venting is needed in the attic to let cold air come in under the roof deck (the wood the shingles are nailed to).

Ice dam victims have to be sure to fix the right thing. If the house isn’t sealed and insulated sufficiently, venting alone is counterproductive, Stone said, because it can draw more warm air from the house into the attic.

A common misconception is that ice dams are a roof problem. But homeowners may replace their roofs and find to their dismay that nothing’s changed. “It’s a building performance problem. It requires an integrated solution.”

Rubber sheathing under the shingles is an extra step to keep water from seeping down to walls and ceilings. This is now a code requirement when a roof is replaced, Stone said.

Homeowners need to make sure that tightening the home’s envelope doesn’t cause problems of its own, such as a buildup of carbon dioxide from the furnace and water heater. Having another energy audit after the work is done will make sure they’re safe, they got what they paid for and spots weren’t missed.

Even a tightly sealed, heavily insulated and perfectly vented house may yield to ice dams if deep snow sits on the roof for a long time. Snow acts as insulation, which can cause the snow on the roof to melt. And freeze-and-thaw weather cycles can’t be prevented.

So if there’s lots of snow, homeowners will want to add the low-tech way to prevent ice dams: the snow roof rake. It’s an unwieldy contraption, usually made of aluminum, which allows a homeowner to shovel his roof in much the same way he shovels his driveway. The rakes range from lightweight scrapers to more sophisticated designs using little wheels and chutes.

At the very least, remove the snow if you can, 10 feet from the edge. Let the sun hit the roof, especially in the areas where the ice dams form.”

Rake with each snowfall so dams don’t get a chance to get started.

In houses, there’s lots of potential for cold air to come in and warm air to leak out. An energy audit will show problem spots. Until air leaks are plugged to form a “sealed envelope” around the living space, insulation won’t perform properly, energy costs will be unnecessarily high and ice dams are more likely to form.