How Will the Uninsured in Michigan Be Affected Under the Affordable Care Act?

Home » How Will the Uninsured in Michigan Be Affected Under the Affordable Care Act? 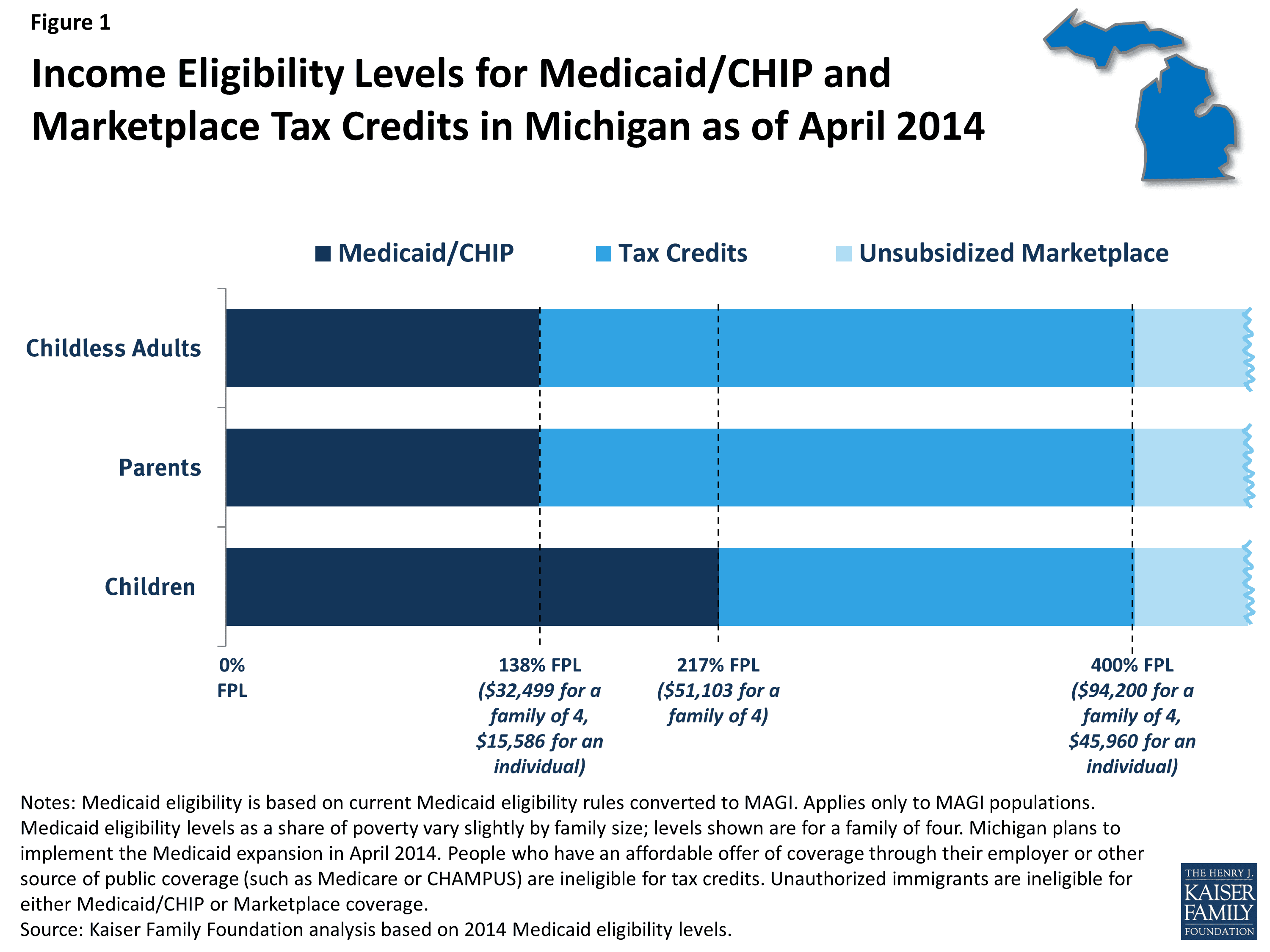 The 2010 Affordable Care Act (ACA) has the potential to extend coverage to many of the 47 million nonelderly uninsured people nationwide, including the 1.1 million uninsured Michiganders. The ACA establishes coverage provisions across the income spectrum, with the expansion of Medicaid eligibility for adults serving as the vehicle for covering low-income individuals and premium tax credits to help people purchase insurance directly through new Health Insurance Marketplaces serving as the vehicle for covering people with moderate incomes. The June 2012 Supreme Court ruling made the Medicaid expansion optional for states, and as of December 2013, Michigan was planning to implement the expansion in April 2014. As a result, the ACA will be fully implemented in Michigan, and almost all nonelderly uninsured, most of whom are adults, will be eligible for coverage expansions. As the ACA coverage expansions are implemented and coverage changes are assessed, it is important to understand the potential scope of the law in the state.

How Does the ACA Expand Health Insurance Coverage in Michigan?

Historically, Medicaid had gaps in coverage for adults because eligibility was restricted to specific categories of low-income individuals, such as children, their parents, pregnant women, the elderly, or individuals with disabilities. In most states, adults without dependent children were ineligible for Medicaid, regardless of their income, and income limits for parents were very low—often below half the poverty level.1 The ACA aimed to fill in these gaps by extending Medicaid to nearly all nonelderly adults with incomes at or below 138% of poverty (about $32,500 for a family of four in 2013).  As of April 2014, Medicaid eligibility in Michigan will cover almost all nonelderly adults up to 138% of poverty, as shown by the dark blue shading in Figure 1.2 All states previously expanded eligibility for children to higher levels than adults through Medicaid and the Children’s Health Insurance Program (CHIP), and in Michigan, children with family incomes up to 217% of poverty (about $51,100 for a family of four) are eligible for Medicaid or CHIP. As was the case before the ACA, undocumented immigrants will remain ineligible to enroll in Medicaid, and recent lawfully residing immigrants will be subject to certain Medicaid eligibility restrictions.3 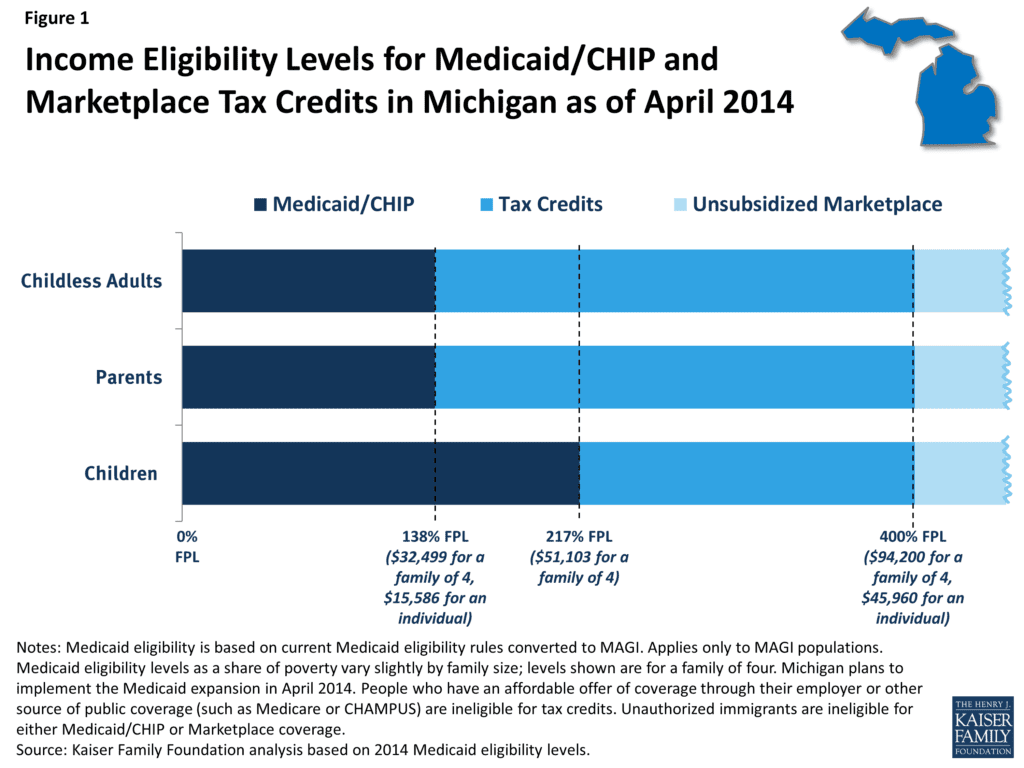 Under the ACA, people with incomes between 100% and 400% of poverty may be eligible for premium tax credits when they purchase coverage in a Marketplace. The amount of the tax credit is based on income and the cost of insurance, and tax credits are only available to people who are not eligible for other coverage, such as Medicaid/CHIP, Medicare, or employer coverage, and who are citizens or lawfully-present immigrants. Thus, the effective lower income limit for tax credits in Michigan will be 217% of poverty for children and 138% of poverty for adults, as indicated by the bright blue shading in Figure 1. Citizens and lawfully-present immigrants with incomes above 400% of poverty can purchase unsubsidized coverage through the Marketplace.

How Many Uninsured Michiganders Are Eligible for Assistance Under the ACA?

With Michigan deciding to implement the Medicaid expansion, over seven in ten (71%) uninsured nonelderly people in the state will be eligible for financial assistance to gain coverage through either Medicaid or the Marketplaces (Figure 2). Given the income distribution of the uninsured in the state, the main pathway for coverage will be Medicaid, with over four in ten (45%) uninsured Michiganders eligible for either Medicaid or CHIP as of April 2014. While some of these people (such as eligible children) are eligible under pathways in place before the ACA, most adults will be newly-eligible through the ACA expansion.  About a quarter (26%) of all uninsured people in Michigan are eligible for premium tax credits to help them purchase coverage in the Marketplace. 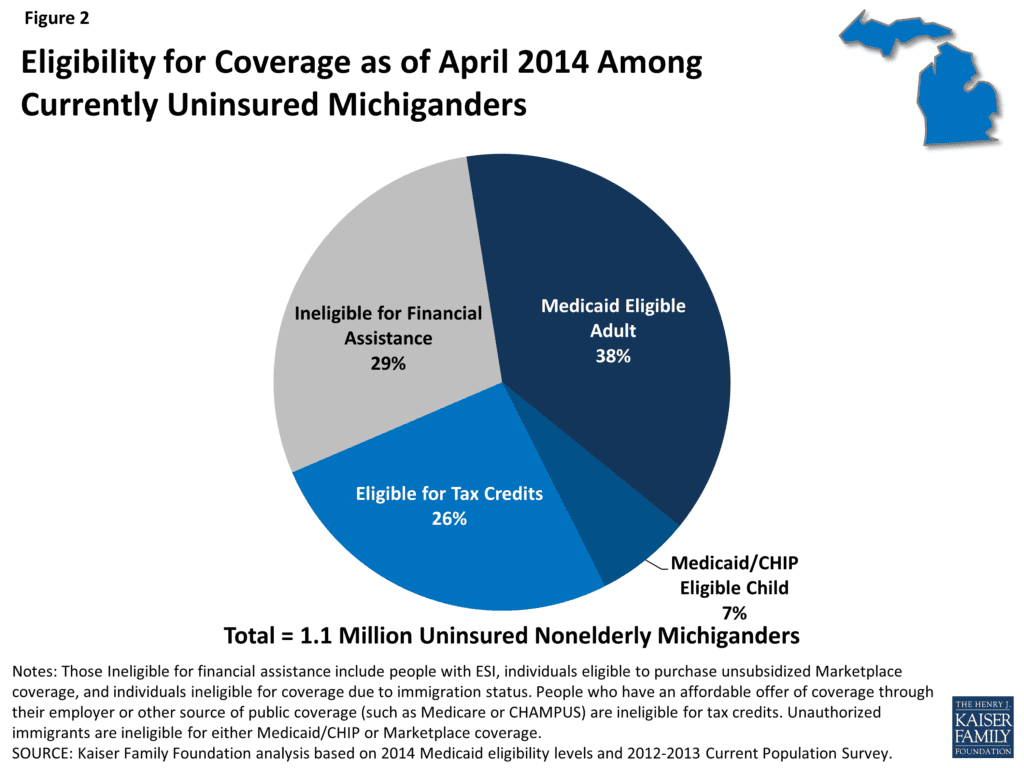 About three in ten (29%) uninsured Michiganders may gain coverage under the ACA but will not receive direct financial assistance. These people include those with incomes above the limit for premium tax subsidies or who have an affordable offer of coverage through their employer. Some of these people still will be able to purchase unsubsidized coverage in the Marketplace, which may be more affordable or more comprehensive than coverage they could obtain on their own through the individual market. Lastly, uninsured people in Michigan who are undocumented immigrants are ineligible for financial assistance under the ACA and barred from purchasing coverage through the Marketplaces. This group is likely to remain uninsured, though they will still have a need for health care services.

The ACA will help millions of currently uninsured Michiganders gain health coverage by providing coverage options across the income spectrum for low and moderate-income people. While almost all of the uninsured in Michigan are eligible for some type of coverage under the ACA, the impact of the ACA will depend on take-up of coverage among the eligible uninsured, and outreach and enrollment efforts will be an important factor in decreasing the uninsured rate. The ACA includes a requirement that most individuals obtain health coverage, but some people (such as the lowest income or those without an affordable option) are exempt and others may still remain uninsured. There is no deadline for enrolling in Medicaid coverage under the ACA, and open enrollment in the Marketplaces continues through March 2014. Continued attention to who gains coverage as the ACA is fully implemented and who is excluded from its reach—as well as whether and how their health needs are being met—can help inform decisions about the future of health coverage in Michigan.